Yes, the title is meant to be provocative. You’ll find no argument with sola scriptura here. But how can the church learn to embrace such a position in a context where people aren’t literate and the Bible hasn’t been translated yet? How do they come to treasure, to depend on, to seek the authority of the Word of Life? The Word is foolishness to those who are perishing. The first task of the translator who imparts the message of life is to make disciples who will receive it.

There was a time when I would have said the translation task involved giving the unreached a well-checked text with an acceptable orthography in the proper register, and that the Holy Spirit (and a few Scripture engagement enthusiasts) could take it from there. But Scripture itself doesn’t support that view. Formal translation work, as much as I love it, is a necessary but secondary part of the task of delivering God’s word. If we treat it as primary, for all the richness and beauty of Scripture, we haven’t done the work Christ commanded the church to do. History reveals that we leave the body vulnerable to syncretism, heresy, and many of the same dangers she faces without the Word. Because the Word is not God’s plan for reaching the nations. We are.

There is lots of discussion in translation contexts about how to best get the Word circulating. Oral recordings, MP3, video, drama, solar-powered players… imaginations run wild, and with good cause: we want to ride the wave of technological advances our audiences are rushing to embrace. But what sometimes gets lost in the discussion about getting the Word into people’s hands, is getting it into their hearts. Biblically, there is one answer to this, and it is always going to be a little countercultural: incarnation.

When God’s Word comes into new places, it always moves by the old fashioned method that’s come to be called “mouth to ear.” Our Father set this example for us. The Scriptures were not left in a cave for us to find, they were written personally by “men moved by the Holy Spirit.” (2 Peter 1:21) When Yahweh speaks into the world, he speaks directly to — and through — people.

God spoke directly with Adam, Noah, and Abraham. When he delivered the law to Israel, he did it through Moses, speaking “just as a man speaks to his friend.” When the prophets were instructed to speak to kings or peoples, they wept, labored, appealed, demonstrated, and argued with God and men. Their habits, diets, clothing, even their marriages and the timing of their children were dictated by their sacred roles as bearers of God’s words.

And when the crowning mystery of creation, the gospel, was revealed, God did it personally, in Christ: the Word made flesh, the Truth from heaven who came and dwelt among us. And according to the Father’s will, the message continues to spread by direct appeal: “God was well-pleased through the foolishness of the message preached to save those who believe” (emphasis mine). “How will they believe in Him whom they have not heard? And how will they hear without a preacher? How will they preach unless they are sent?” The sending of this message is a sending, not of words only, but of messengers.

Even when supernatural means are involved, and they often are, the need for a personal appeal remains. Cornelius was converted with the aid of a vision, but the content of the vision was to seek out Peter, who would personally deliver the message. This pattern matches anecdotal evidence of dreams, visions, and miracles occuring around the world today: the content is always reported to be an instruction of where to find a truth-teller who will impart the message of salvation.

When Paul picks up the missionary calling, he does not aim to inform the Gentiles, but to win them. Note the passion, the pleading: “Therefore knowing the fear of the Lord, we persuade men…;” “My children with whom I am again in labor until Christ is formed in you…;” “We beg you on behalf of Christ, be reconciled to God.”

The personal appeal; the gentle, patient teaching; the sharing not only the gospel of God, but our lives as well, is the calling of those who would reach the lost. Let’s give them the Word, and let’s do it with excellence, but let’s do it by the Book. The church is not tasked ultimately with making accessible, relevant products; she is tasked with making disciples, and it’s personal work. 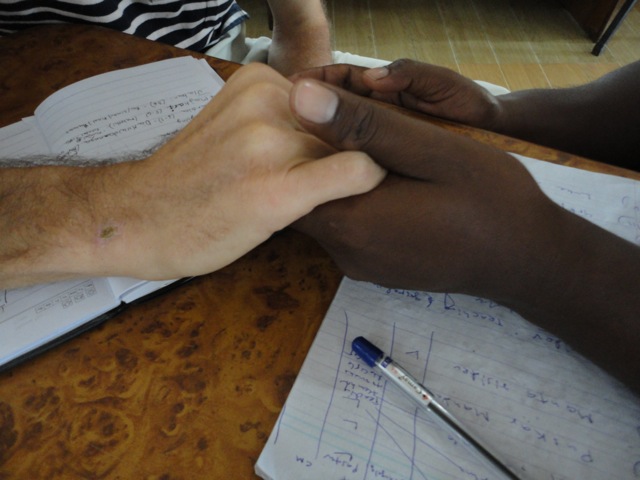 How should this vision drive strategy? You’ve already read some of our answer in previous posts, and we hope to write more in days to come. We’re still learning, and we’d like to hear your thoughts. For starters, it looks like investing more in disciple-makers than in technology. We long for the day that we’ll have a great product to put on those mini-SD cards, but we probably won’t be airdropping them anytime soon.

“Faith, hope, love” is a basic part of gospel teaching and disciple-making. We always thank God, the Father of our Lord Jesus Christ, when we pray for you, since we …

John 17:3 This is eternal life, that they may know You, the only true God, and Jesus Christ whom You have sent. When you are making disciples, make it …

Highlights of Zane Pratt, “Obedience-Based Discipleship,” Global Missiology, Vol. 4, No. 12 (July 2015). [O]bedience based discipleship stresses the importance of teaching people to obey the Bible, rather than …